Some people are more prone to addiction, and some people may have suffered instances where they were attracted to drugs and alcohol as an escape.

Alcoholism and drug addiction are serious problems that affect millions of Americans every year. The National Institute on Drug Abuse estimates that nearly 20 million adults struggle with substance abuse disorders.

There are several reasons why someone might become dependent on drugs or alcohol. Some people develop a dependency because they experience withdrawal symptoms when they stop using.

Others start drinking or taking drugs because their friends do. People also begin abusing substances after experiencing trauma or stress.

What is Drug and Alcohol Detox?

Detoxing from drugs and alcohol can sometimes be dangerous. Medically assisted detox can reduce withdrawal and ensure safety. It also helps patients prepare for the transition back into normal life, which can help prevent relapse.

When a person consumes a substance that contains alcohol, it enters the bloodstream. Once inside the body, the alcohol begins to influence the brain.

The result is that the person becomes intoxicated. If the person continues consuming alcohol even though he/she knows better, he/she will experience physical and psychological dependence on alcohol.

In order to break free from the addiction, the person must undergo a process called detoxification. During this time, all the substances that were consumed during the period of abuse are flushed out of the system.

You will also receive medical care designed to address any health concerns you may have and to stabilize your vital signs. You’ll also likely undergo psychological evaluation and counseling in order to understand what led you to use drugs and alcohol in the first place.

Afterward, the person will feel much better and his/her mind will be clear again.

Medications Used During Detox Include :

After detox, many people report feeling more alert, less anxious, and ready to face the challenges of everyday life. They often feel better than they did before starting treatment.

How Long Does it Last?

Once you complete detox, you should be able to stay sober for the rest of your life. However, if you continue to use drugs or alcohol, you could return to an unhealthy pattern of behavior.

This is often known as a relapse. Relapse happens when you resume using drugs or alcohol despite having completed a period of recovery.

If you think you might relapse, talk to your doctor about ways to avoid returning to harmful behaviors. Your doctor can recommend support groups, counseling sessions, and other resources that can help keep you safe.

Who Needs Drug and Alcohol Detox?

Anyone who uses drugs or alcohol can benefit from detoxification. In fact, anyone who has been diagnosed with a mental illness such as depression or anxiety disorder is at greater risk of developing a substance use disorder.

People who abuse drugs or alcohol tend to use multiple substances. If you’re struggling with one type of addiction, it’s important to seek help for that problem first.

People who have physical issues related to drug or alcohol use, such as liver disease, kidney damage, or heart disease may need to detox.

People who have a family member who suffers from a substance misuse disorder are also more likely to suffer from substance use disorder. Family members can serve as role models for their loved ones, so it’s critical that they get the help they need.

People who live in areas where there is high crime associated with drug use may also fall into drugs.

What are the Risks of Detoxing Without Professional Help?

If you’re experiencing any of the following symptoms, call 911 immediately:

How Long Does Detox Take?

The length of time required to complete detox depends on several factors, including how much medication was used before detox began, the severity of withdrawal symptoms, and whether you were hospitalized during detox.

Withdrawal symptoms generally last between 3-7 days. It’s normal to feel anxious or depressed during this time. You may find yourself thinking about using drugs again.

Withdrawal symptoms will gradually subside over time. The length of time it takes to recover varies depending on the person. Some people feel better immediately after finishing detox, while others require weeks or months to fully recover.

When Should I Go into Rehab?

If you’ve been abusing drugs or alcohol for more than a year, you may benefit from entering rehab sooner rather than later.

You may also be able to make changes to your life that will prevent future problems. If you know you’ll face difficulties if you don’t change, it’s important to seek treatment right away.

In addition to the physical benefits of rehabilitation, you may gain emotional benefits by participating in therapy sessions. Therapy helps you identify ways to cope with stress and learn new skills.

Why Do Some People Struggle with Addiction?

There are many reasons why people develop addictions. Addiction is often caused by genetics, environment, trauma, mental health issues, and/or substance abuse history.

Genetics play a role in determining who develops addiction. Certain genes increase the likelihood that you may become addicted to certain things, whether that is cigarettes, or heroin.

Environment also plays a large role in addiction development. For instance, children raised in homes where drugs and alcohol were misused, are more likely to suffer from addiction problems in the future.

Trauma is another common factor that contributes to addiction. People who have experienced traumatic events such as sexual assault, domestic violence, or child abuse are more likely to suffer from addiction to cope with the pain.

Mental health issues can also contribute to addiction. Depression, bipolar disorder, schizophrenia, and other mood disorders can lead to drug and alcohol abuse. In fact, depression is one of the most common causes of addiction.

Substance abuse history is a major contributing factor to addiction. Many people who become addicted start out experimenting with drugs and alcohol when they’re young.

How Does Addiction Affect the Body?

Addiction affects every part of your body. You may experience physical effects like brain damage, heart disease, liver failure, kidney damage, and even death.

People who abuse drugs or alcohol may also experience psychological effects including memory loss, confusion, and hallucinations. These effects may last for days or weeks after you stop using them.

What are the Signs of Addiction?

The first sign of addiction is usually cravings. Cravings are strong urges to take drugs or drink alcohol. They can cause you to feel restless, irritable, and anxious.

What Should I Look for in an Addiction Rehab Center?

When choosing a rehab facility, consider the following factors:

Yes! With proper treatment, anyone can overcome addiction. It’s important to seek help immediately if you think you might be suffering from substance abuse.

The sooner you begin treatment, the better chance you’ll have of overcoming your addiction.

Can Addiction Be Prevented?

Yes. There are many ways to prevent addiction. Some of them include:

How Long Does Recovery Take?

It depends on the person and the severity of his/her addiction. Recovery takes time but it is possible.

Most people go through several phases of detoxification and rehabilitation before they’re ready to move forward with life without drugs or alcohol. It is common for people to go in and out of rehab.

Alcoholism is a serious problem that has been around since ancient times. Today, we know more than ever about this disease and its causes. We understand that alcoholism is a brain disorder that can affect anyone.

Alcoholism is characterized by compulsive behaviors such as excessive drinking, tolerance to alcohol, and withdrawal symptoms.

When a person drinks too much, he/she may develop physical concerns like liver damage, heart issues, and memory loss. A person addicted to alcohol may also suffer from emotional issues like anxiety and depression.

The good news is that there are effective treatments available today that can help those who struggle with this condition. These treatments include medications, psychotherapy, behavioral therapy, and other forms of treatment.

What are the Signs of Alcoholism?

The following are common signs of alcoholism:

What are the Different Types of Alcoholism?

There are two main categories of alcoholism: primary and secondary. Primary alcoholism refers to the first instance of alcohol consumption.

Secondary alcoholism occurs when someone already suffers from another mental illness such as depression or bipolar disorder. This type of alcoholism often leads to a cycle of relapse and recurrence.

Primary alcoholism is usually caused by genetic factors. The person’s parents might have had a history of alcoholism. They might have suffered from mental illnesses such as depression and bipolar disorder.

It is important to note that these disorders do not cause alcoholism; rather, they make it easier for an alcoholic to become one.

Secondary alcoholism is frequently caused by environmental factors. For example, if a person was abused as a child, then he/she will be prone to developing alcoholism later in life. If a person grew up in an environment where alcohol was present, he/she will probably start consuming alcohol as well. 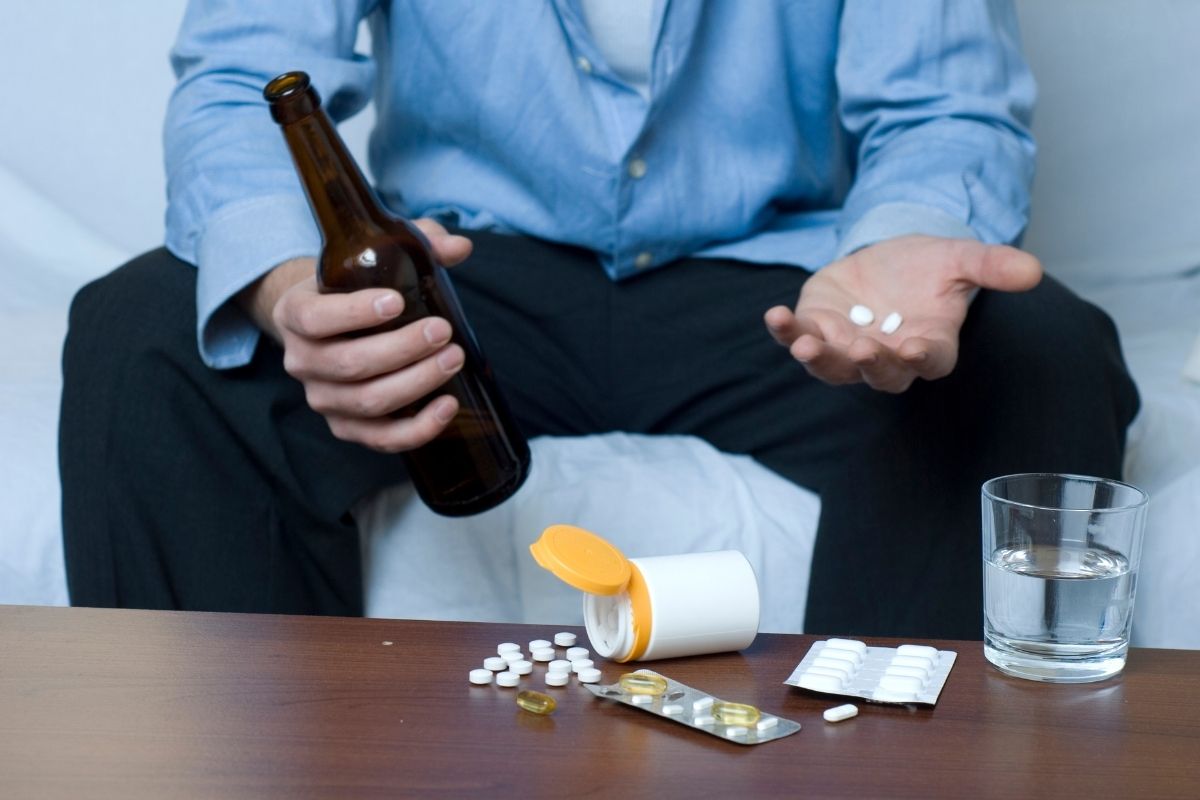 How Does Drug Detoxification Work with Different Drugs?

The process of detoxing, along with your symptoms, will be completely different depending on what drugs the person has been addicted to. Some of the most commonly abused substances include heroin, cocaine, marijuana, methamphetamine, and prescription painkillers (like Oxycontin).

Here are some of the ways that drug detox works:

Heroin users experience intense cravings for the drug. They may feel depressed and anxious because they don’t want to stop using it.

Their body will begin producing high levels of dopamine which creates feelings of euphoria. However, the high wears off quickly and the user feels extremely uncomfortable.

Cocaine users experience severe headaches, nausea, vomiting, restlessness, and insomnia. The effects last longer than heroin but less so than crack cocaine. After the initial rush, many people feel tired and lethargic.

Opioid addicts experience similar symptoms to those who use heroin. They usually experience withdrawal symptoms including chills, sweating, shivering, and diarrhea. In addition, they may develop constipation and stomach cramps.

How Long Does Drug Detox Take?

It depends on the substance that was used and the severity of addiction. It could be days or weeks. The detox will help with physical and mental side effects, but people may resort back to drugs, leading them to detox again at a later time.

If you or someone you know is suffering from any kind of addiction, we urge you to seek professional help immediately.

Detoxing is difficult, and it may prove to be a different experience for different people with different addictions.